As part of a 3 part blog series for International Women’s Day, we are looking at women’s recognition and asking what is the benchmark set for women today?

As women we hear and are told how we should act and it often starts from childhood, irrespective of your cultural upbringing or societal influences. “Girls shouldn’t sit like that”, “your biological clock is ticking!”, and “Men don’t like women like that”. From how to act, to career choices, personality traits and more, society is constantly putting women under pressure, shaping a new ‘ideal’ for us every few years.

For International Women’s Day we’re exploring how women are influenced personally, professionally and socially and the benchmark for women. Is there one? And if so what is it? To address this, there’s a few things we need to understand.

Socialisation means that everyone is a product of their upbringing. This includes their society, culture and religious beliefs which not only forms their identity but their perspective and experiences in the world. This means that the view-point people have on this subject and the world as a whole is different per person. Therefore, the definitions of concepts such as what constitutes as sexual harassment would vary based on the person’s socialisation. An example of this would be a male placing their hand on your shoulder, for one person, this could be entirely acceptable, for another it would be deemed crossing boundaries and seen as harassment. This makes it difficult to place solid statistics on issues such as rape, or gender-based discrimination.

Additionally, the experiences of people vary based on their identity, which is made up of a collection of factors including gender, race, class, religion, beauty, ability (or disability) and more. All of these factors affect how a person experiences life. The life and experiences of a mature, white American, middle-class, atheist woman in the field of academia will vary greatly from the life of a young, Indian, working-class, Hindu housewife. For this reason, intersectionality is highly important when looking at equality, rights and discrimination, otherwise you’re missing the whole picture.

Intersectionality by definition is “The interconnected nature of social categorizations such as race, class, and gender as they apply to a given individual or group, regarded as creating overlapping and interdependent systems of discrimination or disadvantage.” This works as a framework of understanding that takes into consideration different aspects of a persons identity and acknowledeges how all these elements combined (race, class, religion, ethinicty, gender etc.) create a unique experience for that individual and the discrimination they face.

So, coming back to women’s recognition and the benchmark for women today, it all comes back to the history of feminism and the patriarchy. Historically, male domination has not always existed. NewScientist suggests the age of agriculture shifted the hierarchy and power to men. “Things changed around 12,000 years ago. With the advent of agriculture and homesteading, people began settling down. They acquired resources to defend, and power shifted to the physically stronger males. Fathers, sons, uncles and grandfathers began living near each other, property was passed down the male line, and female autonomy was eroded.” Following on from there, with the majority of societies being patriarchal this meant those in positions of power were males and writing from the perspective of males for a male audience. This is important to keep in mind when considering historical accounts for human history.
“The notion that male supremacy was “natural” was self-fulfilling, since those who wrote the laws, the poems, the religious books, the philosophy, the history, the medical treatises and the scientific texts were, very largely, men writing for the benefit of men.“

The long reign of men over women lead to frustration within the female population, leading onto the waves of feminism rising from the 19th century.

A Timeline of Feminism

The first wave of feminism, began in the 19th century, extending to the 20th century. First wave feminism fought to bring about women’s rights to vote and property rights. Followed by the second wave of feminism around 1960s – 1980s which focused on cultural equality rights including workplace, family and reproductive rights. During this time the Equal Rights Amendment was passed by congress in 1972. Third wave feminism spanning from the 90’s to early 2000’s sought to “challenge or avoid second-wave “essentialist” definitions of femininity, which over-emphasised the experiences of white, upper-middle-class women.”

So we can see a ripple effect; from the change of social structures which birthed the patriarchy and limited the rights of women, to the feminist movements that have worked to slowly dismantle this over the years. It is this history that has created this benchmark and placed men as the milestone for women. However, as we progress with women’s rights and move towards a more gender equal society, it’s important to constantly look at feminism and fine-tune it to be more relevant and inclusive to all of society. Mainstream feminism historically has failed with this and it is for that reason so many branches of feminism exist. A one-size-fits-all approach simply does not work for everyone.

This perspective on feminism unintentionally places our male counterparts on a pedestal, making that the goal of every woman. With this we measure the “progress” of women and equality. This approach is flawed as not only does it place men in a position of idealism or perfection, but it fails to take into account the biological differences of the sexes and the needs of women. A good example of this is the controversy surrounded by ‘menstrual leave’.

This has created a new societal relationship between the sexes that marries old traditional issues with new, creating a more complicated landscape. With awareness of women’s rights and gender equality becoming more known, we can slowly see the reduction of harmful practices like female genital mutilation, child brides and more. But the perspective that female inequality is simply a global south issue, or a religious or cultural issue couldn’t be further from the truth. As gender roles change and our social mind-sets change, (as well as the increased awareness and self-identifications of non-binary confirming genders) it’s becoming more visible that despite traditional gender issues declining, new social issues on gender now emerge.

Women still face issues that affect them greater than males, such as rape and harassment, objectification and beauty biases. Physically attractive women are not only likelier to be hired over less attractive women, but they are also likelier to earn more and less likely to be fired. It can be argued that this is due to the male gaze and a bias created from women are depicted in media.

When it comes to issues such as rape, statistics by the Crime Survey for England and Wales (CSEW) estimated “20% of women and 4% of men have experienced some type of sexual assault since the age of 16, equivalent to 3.4 million female and 631,000 male victims.”

An example of newer issues women face is the expectation to carry more traditional roles in addition to working full time.

Statistics show that although the traditional mind-set of a household where women stay at home and men work to provide is on the decline in the western world, the level of unpaid household duties still remains disproportionally larger for females. A study by the British Social Attitudes taken in 2013 measured the views of the British public on both the subject of traditional family roles, employment and the distribution of household chores.

“In the mid-1980s, close to half the public agreed “a man’s job is to earn money; a woman’s job is to look after the home and family.” Just 13% subscribe to this view now. This decline is primarily a result of generational replacement, with consecutive generations being less supportive of traditional gender roles.” 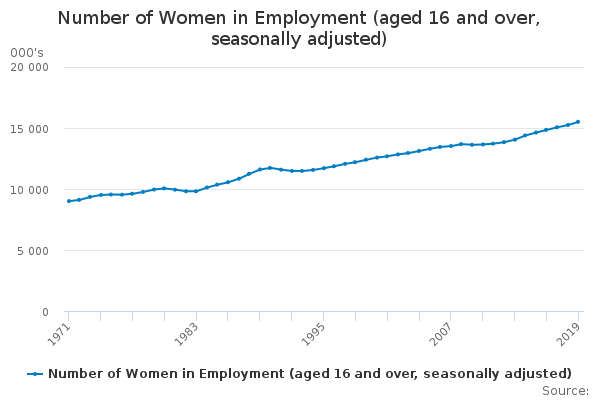 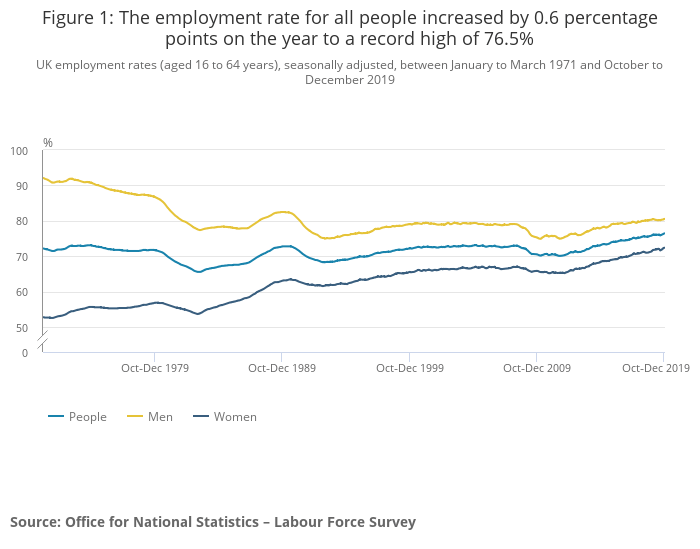 UK employment rates between January 1971 and December 2019 demonstrates how the gap between women and men over the span of the last 48 years has decreased. From a 39.3% gap in employment between men and women to 8.2% gap in the employment of males to females. However, it’s important to note that this does not include individuals that do not identify as male or female and with the increase in people identifying as gender fluid or non-binary, this will affect male to female comparison statistics.

So, we’ve established that the women in the working force has increased by over 70% in the last few years, with the gap between men and women employment almost closing at a mere 8% difference. But does this mean that women are finally equal? Or that home and family responsibilities are now the same? The answer? No.

“Women report spending an average of 13 hours on housework and 23 hours on caring for family members each week; the equivalent figures for men are 8 hours and 10 hours.” In the same report by British social attitudes, 2013 the study asked males and females in a relationship what the housework load was like with 60% of women reporting they do more than their fair share of household chores. So, in essence, women are working and doing a larger portion of house chores.

It seems that society expects women to carry out the majority of household chores, whilst integrating into the workforce by working full time, placing more pressure on women. Male benchmarking for feminism ignores intersectionality. It ignores the needs of women when feminism is treated solely as a gender issue, which is dangerous. Lastly, the pressure for women to replicate traditional male roles as some forms of feminism suggest, strips away the choice or at the very least shames women who are happier in traditional gender roles or prefer more nurturing, maternal roles.

The idea of feminism is to enable women to have the option to choose whatever is better for themselves. Social issues created by the shift of gender roles need to be addressed, removing the stigma surrounded by “women jobs/roles” needs to be irradiated, and the promotion of such roles for males needs to continually be encouragedand Intersectionality needs to be at the forefront of gender equality. Lastly but arguably most importantly, the notion that equality does not mean equal needs, needs to be addressed more within discussions on gender and feminism.