HADs partner Islamic Relief UK has launched a videogame in partnership with Ultimatum Games, with the aim of teaching young people how international aid works and to tackle negative perceptions of Muslims. 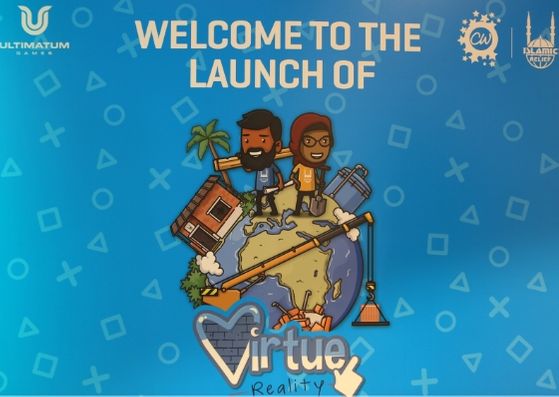 The game, ‘Virtue Reality’, is based on real international development projects run by Islamic Relief in more than 40 countries across the world, from Pakistan to Mali.

Virtue Reality launched on Thursday 17 October at the National Videogame Museum in Sheffield, where school students from Sheffield’s Silverdale School and Manchester Islamic Grammer School for girls were some of the first to try out the game. It is now available to download for free on Apple and Google devices.

Islamic Relief UK launched the game ahead of Charity Week, a fundraising campaign among Muslim students in the UK, which starts on Monday 21 October.

Virtue Reality comes from a recognition that Muslims are often presented in a negative light in films, TV programmes and videogames – usually as ‘the bad guys’. It also addresses a gap in the knowledge of the general public with regards to how foreign aid works.

The game is an ‘Idle Clicker’ game. The gamer is invited to build projects such as shelters, boreholes and schools. As they click, the gamer accumulates enough ‘DeedCoins’ – the game’s currency – to build the first phase of a project. These DeedCoins reflect the good deeds that Muslims are expected to carry out as part of their faith.

Throughout the game, the user will receive feedback on how the project is going. From time to time, they will receive ‘donations’ randomly, in the form of DeedCoins from Islamic Relief’s funders, such as the Department for International Development (DFID) or Charity Week. They will also be directed to charity videos, so that gamers can make donations – or to the shop, so that gamers can make in-app purchases. The income from these will support the charitable work of Islamic Relief.

Judith Escribano, Head of Communications at Islamic Relief UK, said: ‘We see Virtue Reality as a solution to two challenges presented by society: scepticism of aid and increasing Islamophobia. We are living in a political climate that is hostile to both aid and Muslims.

‘There is increased scepticism towards the charity sector, and often people do not understand that the work undertaken by organisations like Islamic Relief involves working with local people in poor countries to help lift themselves out of poverty. This game will teach both children and adults about the process of delivering aid and how the money donated is used. It will also show Muslims doing good deeds.’

Shahid Kamal Ahmad, Managing Director at Ultimatum Games, said: ‘Having worked in the video games industry for 37 years, I can’t help but notice that, as with the media and pop culture, Muslims are generally presented in a negative light in videogames.

‘Often, when you see characters from the Islamic faith in videogames they are ‘other’ed’ as terrorists or villains you have to kill, usually dark-skinned characters shouting Allahu Akbar and carrying weapons. I haven’t seen people from my community portrayed in any other way in videogames. It is as though there is no other way for a Muslim to be: you never see any peaceful, ordinary Muslims just going about their lives.

‘The Qu’ran said that to save a life it is as though you have saved all of mankind, and Muslims take inspiration from this. Muslims give more to charity than any other religious group in the UK. In showing Muslim aid workers supporting some of the world’s poorest people to lift themselves out of poverty, Virtue Reality portrays the generosity and humanity of the Muslim faith; we hope it will inspire other videogames to follow suit.’

‘It’s another way to learn how our projects work, and also help raise funds for future projects. This is going to be something that we can build on and we hope that it will be a great asset to the organisation for years to come.’

Islamic Relief is a faith-inspired, development and humanitarian agency working to transform and save the lives of some of the most vulnerable people in over 40 countries. Islamic Relief assists people according to need and does not discriminate in any way.

Set up in Birmingham in 1984 by a group of volunteers, we have assisted over 117 million people all over the world. We’re saving lives and empowering people to lift themselves out of poverty in over 40 countries – from Bangladesh to Bosnia, Pakistan to Palestine, Kenya to Kosovo. Islamic Relief is on the ground in some of the world’s most dangerous and difficult places – including Syria and Yemen – strengthening the most marginalised communities to withstand conflict and natural disasters and to build a brighter future. We also support vulnerable people in the UK in partnership with local charities and organisations.

Ultimatum Games Ltd is a video games development company, run by Shahid Kamal Ahmad. Ahmad is the former Director of Strategic Content at PlayStation; was one of Games Industry International’s Top 10 Persons of the Year; and has been named within the 100 Top Influencers in the British Games Industry.

In 2019, Ahmad joined hands with the international development agency Islamic Relief to find a unique and interesting way to raise awareness about what a charity does and also dispel negative stereotypes of Muslims that he saw across the industry.

Charity Week is one of the world’s largest volunteer-led Charity campaigns. It started in London in 2003 with one student collecting funds in a shoebox; it has now grown to be an international annual fundraising and engagement event taking place across the globe. With more than £8 million raised in the last 15 years, Charity Week is fast becoming one of Islamic Relief’s most exciting campaigns, with over 5,000 students participating directly in the campaign. Funds raised have assisted orphans and vulnerable children in 27 countries worldwide.

INGOs and the Localisation Agenda