As part of a 3 part blog series for International Women’s Day, we are looking at women’s representation in the media and what real life affects this has.

Why is media representation important?

When you are born, you are a crying, opinion-less being. New born babies have no strong opinions or biases towards or against anything other than whether they’re going to spit out their food or not. Babies are essentially a blank slate. It’s not until we start to grow and develop, that we form opinions, and media consumption plays a huge part in this.

Infants as young as 3 months have been able to distinguish between male and female faces and by 10 months are able to associate faces of women and men with gender-typed objects (e.g., a scarf, a hammer), suggesting that they are able to form primitive stereotypes.

According to a 2018 Ofcom report, over 94% of children aged 3-15 watch TV for over 13 hours a week and as they get older, more and more use streaming services such as Netflix and Amazon Prime Video, use YouTube and have social media profiles. That’s a lot of time and a lot of media sources to absorb messaging from.

If children as young as 10 months can begin forming stereotypes based on gender, imagine how much of an affect the representations of women in media can have on the opinions and biases of 3-15 year olds when they consume so much.

To some extent, fiction has to rely on stereotyping as a method of communicating to the audience. Using stereotypes allows the audience to quickly recognise what type of character they’re seeing. However, perpetuating stereotypes can have a negative effect as they can translate from a tool for fictional storytelling to reinforcing real-life biases. In Representation: Cultural Representations and Signifying Practices, Stuart Hall suggests that media representations stem from gender norms, roles, and values previously embedded in our culture. While it is true that stereotypes originated from gender norms in society, it seems that representations of women in media are not progressing as quickly as the world is, which is likely due to the fact that there are comparatively few women working in the media and tech industries. Harmful stereotypes of woman include: women are bad drivers, women are materialistic, women enjoy housework, women are not good at sports, women aren’t as capable as men, women are over-emotional, women are gossips, and women are shallow.

Tropes are reoccurring motifs we can identify across huge amounts of media, and there are thousands of them. One of the most potentially damaging is the Token Female, also known as The Smurfette Principle. This is when the main cast is made up of a group of males and only one female, usually defined by a stereotype. Examples include Smurfette in The Smurfs, Miss Piggy in The Muppets, Bo Peep in Toy Story, Black Widow in The Avengers, Princess Leia in Star Wars (original trilogy), Uhura in Star Trek, and Martha Singer in Fight Club. These female characters are sometimes excluded from the action and often serve as a love interest and reward to (one of) the male protagonist(s). The message from this is clear. Men are the norm, women are the variation; men are central and women are on the periphery; women exist in relation to men.

British news media is arguably no better than fiction when it comes to perpetuating stereotypes and degrading women. It seems regardless of a women’s status or position in society, her appearance will be scrutinised. Back in 2017, the Daily Mail was criticised for a front page with an image of the Scottish First Minister, Nicola Sturgeon, and the then Prime Minister, Theresa May, wearing skirts, accompanied by the headline “Never mind Brexit, who won Legs-it!” Focusing on their physical appearance rather than on their meeting about the UK leaving the European Union, undermines and sexualises them. For further proof of the Daily Mail’s sexist attitude towards women you need only go on their homepage and scroll through the headlines of the articles referring to women – the words “sizzles”, “displays”, and “exhibits” appear frequently, reinforcing connotations that women are objects to be looked at.

Pitting women against each other is another common theme across British news media. Over the years the Duchess of Sussex, Meghan Markle, has been shamed for the exact same things for which her sister-in-law the Duchess of Cambridge, Kate Middleton, has been praised. This also has an underlying racism to it because of Meghan Markle’s ethnicity as a mixed race woman. This perfectly highlights how, no matter what women do, they can never win.

When being interviewed, female celebrities are often subject to questions with sexist undertones, frequently asked about their appearance rather than their craft or how their male partner feels about something or how they manage to have a career as well as a child. 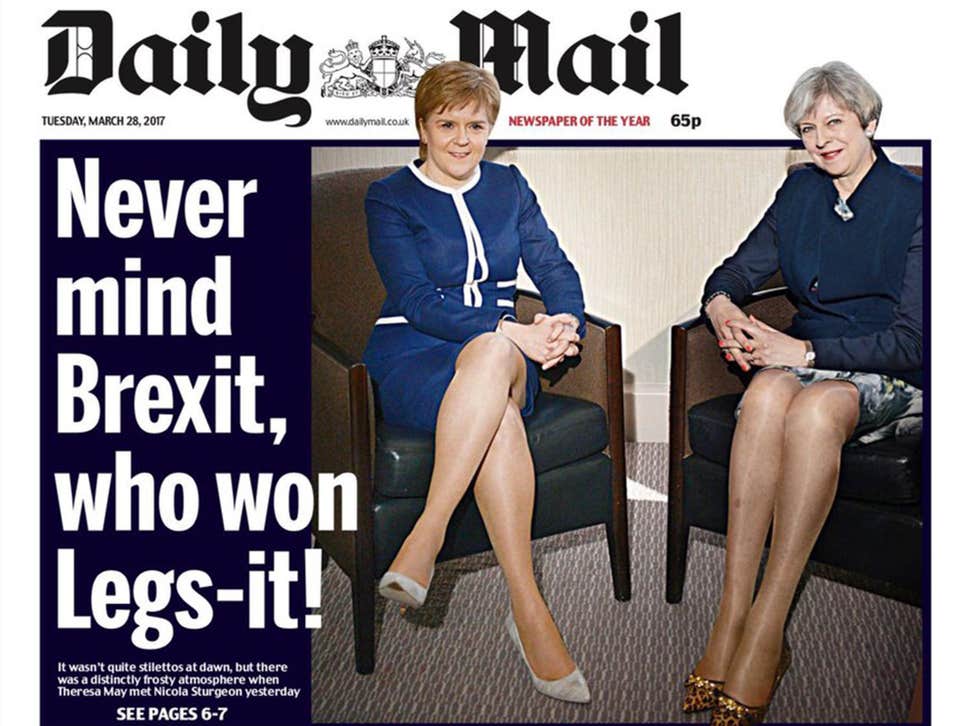 There is a wealth of data proving that women are underrepresented in the UK, EU and US both working in and depicted in media.

In her 1975 essay Visual Pleasure and Narrative Cinema, feminist film theorist Laura Mulvey, coined the term “Male Gaze”. While originally used in reference to cinema, the theory can be applied across all media. The theory asserts that, because of the patriarchal society that we live in, we are forced to view women in media from a heterosexual male perspective – as we experience a piece of media we become the “bearer of the look”.

This concept is no surprise considering the statistics regarding how few women work in media.

Attempts to subvert stereotyping occurs often in action films with a female lead but even then, female protagonists tend to use typically masculine means to progress the plot and are still either over-sexualised or completely desexualised. Either way, an emphasis remains on their physical appearance. Psychologist Sigmund Freud suggested that ‘femininity is characterised by a preference for passive behaviour and passive aims’. The value of femininity is not recognised as something that progresses the action, and so female characters have to adopt male characteristics and usurp the active male role.

Read more about the benchmarks set for women.

What is the Ideal?

A lot of what we see of women in Western media adds to the pressure put on women to be an ideal figure of womanhood; a family orientated yet career driven women, who is strong and independent yet subservient; she’s attractive but not vain; she is sexually experienced yet not promiscuous; she’s kind and caring but not over-emotional.

From advertisements to film, video games to the news, there is a societal expectation of how women should be – the ideal changes across different media, but the expectations remain. They stem from the concept that men are the norm, they represent humanity or “mankind”, and women are the other, when really, the ideal should be that there is a more diverse representation of people in our media.

The point is women are underrepresented in media and when they are seen, they are often depicted in a derogatory or objectified way. How are women supposed to see themselves as high achievers in positions of power, or as engineers or scientists, when growing up they see women in the media as side characters, love interests, objects and rewards? Why would a woman want to see herself as Prime Minister if even female Prime Ministers are reduced to their appearance?

This clear bias that we are brought up with and fed throughout our lives is partially responsible for the gender inequalities we experience in everyday life, such as in the workplace, in almost every sector. Even in the third sector which is female dominated, there is still gender disparity at board level. While programmes has found that the amount of women in management and senior management positions in the sector has risen, only 32% of CEOs are women, a mere 2% increase since 2014. Fore more detail read our blog on Women and the Workplace.

It is vital that we work together to reduce the gap and utilise this experience to enable more women to progress into leadership positions.

It is of course much better now in 2020 than it has been previously, but there’s still a way to go until women are truly represented in the media.